Our current President has promised to “put a Black woman on the Court” with current Associate-Justice Breyer’s retirement.

I offer for consideration that to be “fair,” the next Supreme Court Justice should definitely be a female … but should fairly be an Asian-American, or other minority than post-African – for the following reasons.

The definition of “Fair” in A Democratic Republic means “representative of percentage of population.” In terms of equity as to race and gender – based NOT on some group’s agenda, but on pure representative Democratic demographics.

See the charted information below – and then read on. 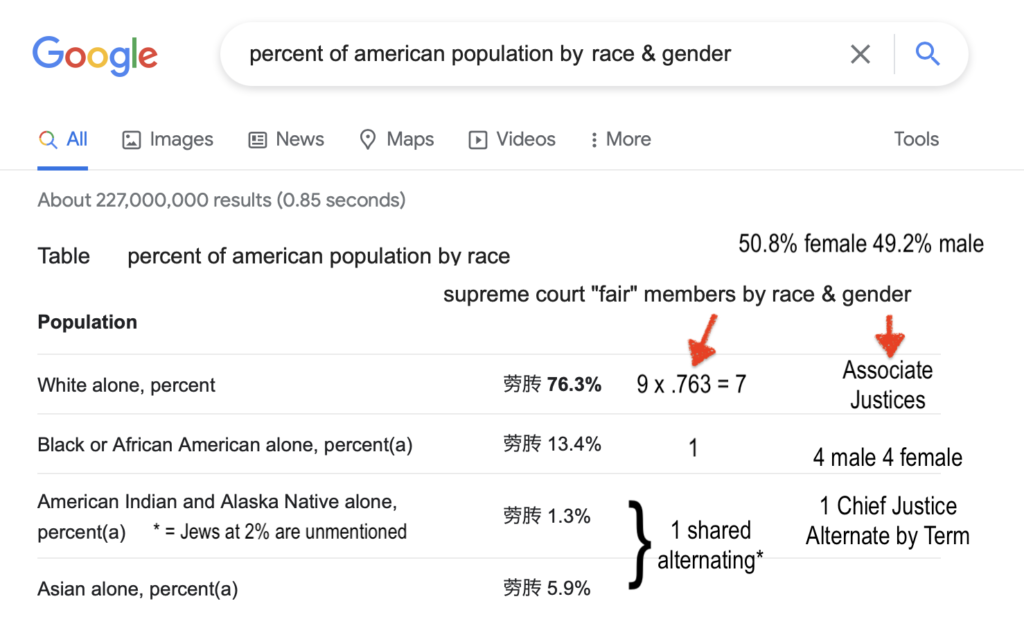 America’s Black population percentage (13%) entitles them by “fairness” to 1 Supreme Court Justice (.13% x 9 Slots = 1.17, which “rounds” down by unbiased math to 1). There is already a Black American on the Supreme Court: Justice Clarence Thomas. The American Jewish 2% is represented by Justice Kagan.

As to the gender side of the matter male to female ratio in the USA is 50/50. So, to be genuinely “fair” … there should be 4 male justices and 4 female.

There are currently 3 female Associate Justices and 5 males – so we are “due” 1 more female: but not Jewish, African or Latin, because THOSE minorities HAVE Justices currently sitting: Justices Kagan, Thomas and Sotomayor.

What about an Asian-American (6%) or Jewish-American (2%) or First-American (“Indian”) or Alaskan-American or Indian/Pakistani or Arab-American Justice? (1.3% combined)?

Why does our President feel compelled to place a “Black woman?”

(a) the Democratic Party might be setting up Vice-President Kamala Harris to exit the Vice-Presidency (her numbers are dismal) … and move her to the Supreme Court. This would allow the Democratic Party to place a new Vice-President more beneficial to the upcoming Midterm Elections, and possibly to inherit the Biden Presidency in 2024, 2028, or possibly before 2024 if health issues require President Biden to resign, or the Government to exercise the 25th Amendment. Or …

(b) the Democratic Party might be kowtowing to the 13% voter-base of African Americans for the upcoming elections: or …

All this flies in the face of CERTAIN zone of race-advancement efforts, in which to be “fair” people insist that 13% be treated as if it equals 33% to 51%. That is not “fair.” That is agenda-driven math, in this writer’s opinion.

May The Republic endure.