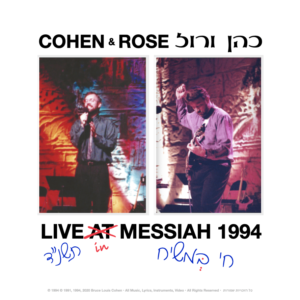 Here for the first time ever is an audio EP (in Apple™ AAC format) of the trailblazing live performance of Bruce Cohen & John Rose at the 1994 MJAA Annual International “Messiah” Conference.

The EP is FREE. There is no purchase price. But – do feel free USE THIS LINK TO DONATE! Standard price for an EP or Album is usually US$10 to $20.

“Jacket Copy” Notes & Info Are Below The Tracks. – Enjoy!

5. You, You, Yeshua (NEW, never before released)

Cohen & Rose was the first Messianic Jewish “super-group” ever to form.

Bruce Cohen, with over a decade as the popular lead instrumentalist, composer, and producer from the veteran band-driven choral ensemble, Kol Simcha – and John Rose, for many years the lead vocalist from the accomplished performing and recording group, Shivat Tzion – fused into a duo, creating a new and exciting presence in the Messianic Jewish worship music world.

His first creative season with Kol Simcha brought The Movement music ranging from intimate duets to Beethoven-sized choral arrangements, fusing Klezmer-derived rock and with Broadway-styling and dances or mid-song music-backgrounds playing under live readings from Scripture: all this was what earned Kol Simcha its 1978-1990 reputation for “bringing it” to worship.

As was said to a 2005 gathering at The King David Hotel in Jerusalem, by an Israeli cantor & worship leader of long international experience speaking about Kol Simcha‘s impact at conferences when leading worship, “… everyone knew the real creative force, the engine behind Kol Simcha, was Bruce Cohen.“

Holy merged spiritual vibrancy with vocal and musical skills hard to believe could be packed into only two musicians, Cohen & Rose concerts ranged from soft, intimate ballads to blazing keyboard solos and lead-guitar driven rock-anthems that shook the very ground. You never really knew what was coming next: John & Bruce could be duetting voice-and-solo-guitar in pieces like, “The Power of God” … or John might be resurrecting his theatrical training to juggle & kibbitz with the audience as Bruce fixed a broken guitar string onstage. Laughter to tears to thunder – it was all there.

The Holy album’s final song, It Is Time, was chosen as the opening and closing theme song for the Messianic Judaism Today tv show, broadcast throughout America via the Sonshine Network based in American music capital, Nashville, Tennessee –– and Cohen & Rose quickly became “headliners” at regional and national/international conferences across the United States – and for nine years – until the duo went separate ways in 1999.

This new live EP at “The Conference” captures the live impact Cohen & Rose’s music had on the audience at this main event on the main stage, and allows you to “be there” as you listen and worship along.

This EP also contains a song new in 1994, never released until now on public recording: Bruce Cohen’s confession-of-faith anthem, You, You, Yeshua – that got a reaction from the crowd seeming to “lift the room off the ground” as the closing song of their 5-song  Conference-closing concert: one of the two main concerts of the week-long gathering of Two Testament Jews from all over the world.

The lyrics for these 5 songs are embedded in the Apple™ AAC file Lyrics function.

This 2020 LIVE EP is provided FREE of charge.

We also invite and encourage you, in line with the Biblical precept that “the worker is worthy of his wages (Matthew 10:10)” and the fact that worship musicians have bills to pay like anyone else …

Please feel free USE THIS LINK TO DONATE!

Standard price for an  EP or Album is usually US$10 to $20 (or its non-USA equivalent) – or more, if you wish :-). However generously you might feel is appropriate.

Such support is what enables Music Ministers to keep ministering music to our Movement and beyond!

Please also note – the hard-copy Holy CD is now only available as the 2nd CD in the 2-CD “greatest hits collection” mentioned above. It can be purchased at this link. ]

The full 2CD set can be also heard on “Spotify” by subscribers to that service.

Thank you for your support over decades of Bruce Cohen’s music ministry.