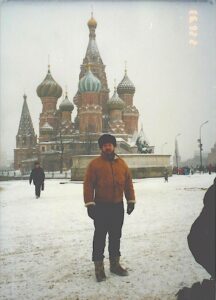 This author in Moscow’s “Red Square” 29 years ago, while teaching at one of the first “Messianic Jewish” Conferences in the first season of “Glasnost” (openness)

“You will be hearing of wars and rumors of wars. See that you are not frightened.” – Matthew 24:6

“If a leader pays heed to lies (becomes delusion-driven), then all his ministers/underlings become agents of those same lies.”- Prov. 29:12

War in Europe began once more today. As Yogi Berra said, “It’s like déjà vu all over again.” Along with the rest of the democratic West, I awake today seeing the Russian “blitzkrieg” hitting Ukraine as the Nazi “lightning war” hit Poland less than a lifetime ago, and I am deeply moved by the pain yet another delusional madman is inflicting on the world because he has terrorized or murdered all opposing voices into silence.

Let’s be clear: here is Vladimir Putin’s argument for his war on Ukraine: he asserts the Ukraine leaving Russia is like one of the Confederate Southern States in 1860 having left the United States. His argument sums up as this: America fought a civil war to get states wrongfully having left the United States to come back in – against their own will. This is our war on Ukraine today. Ukraine is a state within Mother Russia; and Mother Russia will have her children back. In this, Putin ignores the fact that unlike the Southern States in America who joined the United States willingly under their own volition, Ukraine never voluntarily entered into a Union with Russia. In 1922, under a Russian assault they could not withstand, the independent nation of Ukraine was forcefully subjugated and absorbed against her will into the U.S.S.R. – Russia.

Putin’s view of the Ukraine as an historically natural part of Russia is pure delusion. It has no basis in historic fact.

Additionally and sadly, Putin is using the exact same argument for his attack on Ukraine that Adolf Hitler used to take over Czechoslovakia’s “Sudetenland” (Southern Region): Hitler asserted the Sudetenland was filled with German speaking, German people who were oppressed by the Slovakian majority surrounding them; and Germany attacked to ‘protect’ them from the abuse of the Slovaks who surround them. The Führer’s “logic” was pure nonsense; but lying to justify his own delusions was something Adolf Hitler turned into a kind of evil art-form.

The solution to 2022’s Russian Blitzkrieg problem is not to attack Russia.

It is somehow to remove Putin.

Imagine Nazi Germany in September 1939, if, once the German Blitzkrieg against Poland started, Hitler was somehow removed. Game over. No World War II. The Nazi Agenda was entirely an artifact of Adolf Hitler’s personal delusional quest.

Christian theologian and pastor, Dietrich Bonhoeffer, understood this, which is why as a Two-Testament believing spiritual leader, he cooperated with Von Stauffenberg’s April 1944 attempt to assassinate Hitler. Bonhoeffer’s antipathy for “cheap grace” also expressed itself in disdain for the version of faith finding expression often as confrontation-avoidance rather than robust, ethics-driven action. Bonhoeffer did not subscribe to the idea that the highest Biblical value was the absence of conflict.

Additionally – it is wrong to punish sheep (bound by their nation’s laws to serve their country) for the choices of their leaders who are abusing their high offices. And Scripture teaches us, “If a leader heeds lies (becomes delusion-driven), then all his ministers/underlings become agents of those same lies.” (Prov. 29:12)

Bold American leadership in this situation?

Find some way to remove Putin from power as quickly as possible.

All Hitler wanted for a “Greater Germany” and “A Thousand Year Reich (Empire)” and a Europe made “Judenrein” (empty of Jews) ended the day Hitler’s reign over Germany ceased.

The world could move on.

Historian George Santayana (1863-1962 ce) said, “Those who do not learn from history are doomed to repeat it.” Putin is running the exact same game on the West now that Hitler ran on Britain’s Prime Minister Neville Chamberlain in the late 1930s: lie about his territorial ambitions, and just keep taking-and-placating, taking-and-placating … moving toward his genuine goal – German Hegemony (world-rule).”

Putin wants the USSR back in its pre-Gorbachev/Perestroika form. Everything else is just conversation. As much so as trying to dissuade Adolf Hitler from his “Thousand Year Reich” vision by using reasonable arguments against its founding ideas of Aryan Supremacy, Mongrel Races, and The Jewish Plot To Rule The World. No facts or logic would avail. The ideas were not the result of rational thought, so rational thought would have no effect on Hitler – nor Putin.

There seems little actual hope of prying Putin’s delusions about Ukraine from him: and, the vast aquatic, mineral, chemical, and agricultural wealth in the Ukraine is an irresistible attraction for the actually-plutocratic Putin, who is, at present, one of the wealthiest people on earth – as his people suffer and die and starve.

Putin is the problem – not the Russian people.

The beautiful Russian soul is still alive, as Boris Pasternak held forth in his heroine, Larissa Antipova, in his novel, “Doctor Zhivago.” A Russian literary analyst with whom I discussed Pasternak in Israel last July, I told I understood from my comparative literature point of view, why he chose the names of many of his characters in Zhivago: for instance, the parasitic main villain is Komorovski – which is Russian for a mosquito, a bloodsucker. But I have long been puzzled by Pasternak’s choice of the name of his heroine: “Larissa” or “Lara” for short. So, I asked this Russian-born, Moscow-raised and educated master of Russian literature, whose Russian was far superior to my own, if she knew why Pasternak chose that name – and she answered that she did not know. She had never thought about it before I asked. But – thinking about my question, it seemed to her “Larissa” is suggestive of the Russian word, ларец “lari’etz” – a treasure-box meant to hold heirlooms of great value and significance. Larissa is the name with which Pasternak seems to have suggested his heroine was the symbolic cache of the Russian soul’s loving and exploited beauty; and the fact the poet, Yuri Zhivago, could see her for what she was, love her for what she was, and wrote exaltingly of her soul – that was Pasternak’s response to the Russian Communist Party’s assertion, “The personal life in Russia is dead.” and “The State is all that matters.” Pasternak wrote truth in response to delusion. The regime’s reaction? Of course, the Doctor Zhivago was banned in Russia by the delusional power-holders. Just as today, 24 February 2022, as Russia’s Novveye Gazetta newspaper declared it would publish in both Russian and Ukrainian to affirm the Russian People do not consider the Russian language used in parts of Ukraine an excuse to take over the country, Vladimir Putin quickly issued a statement saying, “Any publication criticizing the action on Ukraine will be considered treason (a capital crime) against ‘Rodiyna’ (The Motherland).” The Führer … uh, President Putin … will tolerate no dissent.

Putin said a short while ago, “Happiness (the pursuit of which was articulated in the American Declaration of Independence to be one of the core rights of humans everywhere) is non-existent in the world. It is a fantasy, and therefore, of no importance.” Like all despots, he leaves his own happiness out of his aphoristic reduction of reality. So says a man who has become a billionaire (which seems to make him very happy) at the expense of all the people he has murdered or trampled.

The madman Putin, has taken peace again from humankind simply trying to live in a world that makes that simple task challenging enough.

May this new Blitzkrieg end as quickly as it started.

The thoughts and prayers of this Two-Testament believer are with the people of the Ukraine – and Russia – as they and the West are newly at war – again.