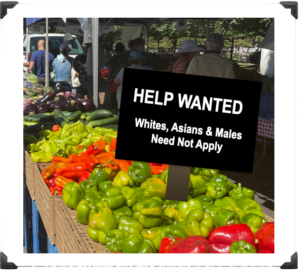 With all the present furor over Judge Ketanji Jackson’s nomination for the US Supreme Court, it seems to me the real main point of the matter is being entirely overlooked in public discourse.

Presidential-Candidate Joe Biden’s campaign promise “My first nominee to the Supreme Court will be a Black woman,” and his delivery of that campaign promise when actually President, were both literally against the law; as follows:

Title VII of the Civil Rights Act of 1964

It shall be an unlawful employment practice for an employer –

(1) to fail or refuse to hire or to discharge any individual, or otherwise to discriminate against any individual with respect to his compensation, terms, conditions, or privileges of employment, because of such individual’s race, color, religion, sex, or national origin; or

(2) to limit, segregate, or classify his employees or applicants for employment in any way which would deprive or tend to deprive any individual of employment opportunities or otherwise adversely affect his status as an employee, because of such individual’s race, color, religion, sex, or national origin.

White and Asian (and Indian and First-American and Inuit and Philippine, and Polynesian)  are “colors” and/or “national origins.” Male is a sex (gender). Those colors and that gender were were excluded from hiring consideration, purely on the basis of their color and gender. Candidate, then President Biden, directly stated so when promising, and when nominating.

President Biden broke the law when making this nomination: Jackson’s candidacy is now too tainted with illegality and political interests to be healthy going forward: it needs to be withdrawn.

Whether or not Judge Jackson might make a good SCOTUS Justice is no longer possible to evaluate dispassionately: she was openly chosen specifically because of her gender and race. We can never know if she is the “best” candidate available now for the job, because so many other possibly-better candidates (per acumen, experience, demonstrated judgement, and character) were preemptively erased from consideration with the twin broad-brushes of gender and race directly illegal, per US Law.

The main reason no one in law or government will say so in public now appears to be because of fear of being “cancelled” – meaning, shame-bombed in public outside due process by use of poorly regulated mass-media. Cries of “racism” and “Jim Crow” are already present, for those merely probing the appropriateness of the candidate: which is the specific job of Congress.

However, citing the law, plainly written on the page in the United State Code (of Laws) is not racism: it is lawfulness.

Its opposite – lawlessness – would be our highest elected official, our President, nominating someone for the highest legal authority in the land, the Supreme Court, in ways that directly break the law. That would be ethically and governmentally oxymoronic to the point of insanity.

The madness needs to stop.

Candidate Biden made a promise pleasing to his base to get elected. He is keeping it, at least in part, to retain that base for the coming Midterm and next Presidential elections. It was a politically driven choice that broke the law.

It needs to be walked back.

I am not a professional jurist, nor an elected US Representative – so I am not qualified to decide if Judge Jackson is a good choice for The US Supreme Court; and most voices I have heard speaking on the issue are not qualified to do so, either.

However, per USC Title VII, a candidate’s gender, race, or religion are illegal as considerations when choosing a candidate. Illegal. That is clear.

What would the reaction have been if Candidate Biden had promised in 2019, “We’ve had quite enough White and Black Christians in American government: my first Appointee to the US Supreme Court is going to be an Asian or Indian/Pakistani Buddhist, Hindu or Sikh.”

The outcry would reach the heavens.

The outcry would be, “Title VII makes religion, color, or national origin illegal as considerations!”

That outcry would be correct.

It is time for the President and the Congress to keep their oaths of office.

So says this one citizen.